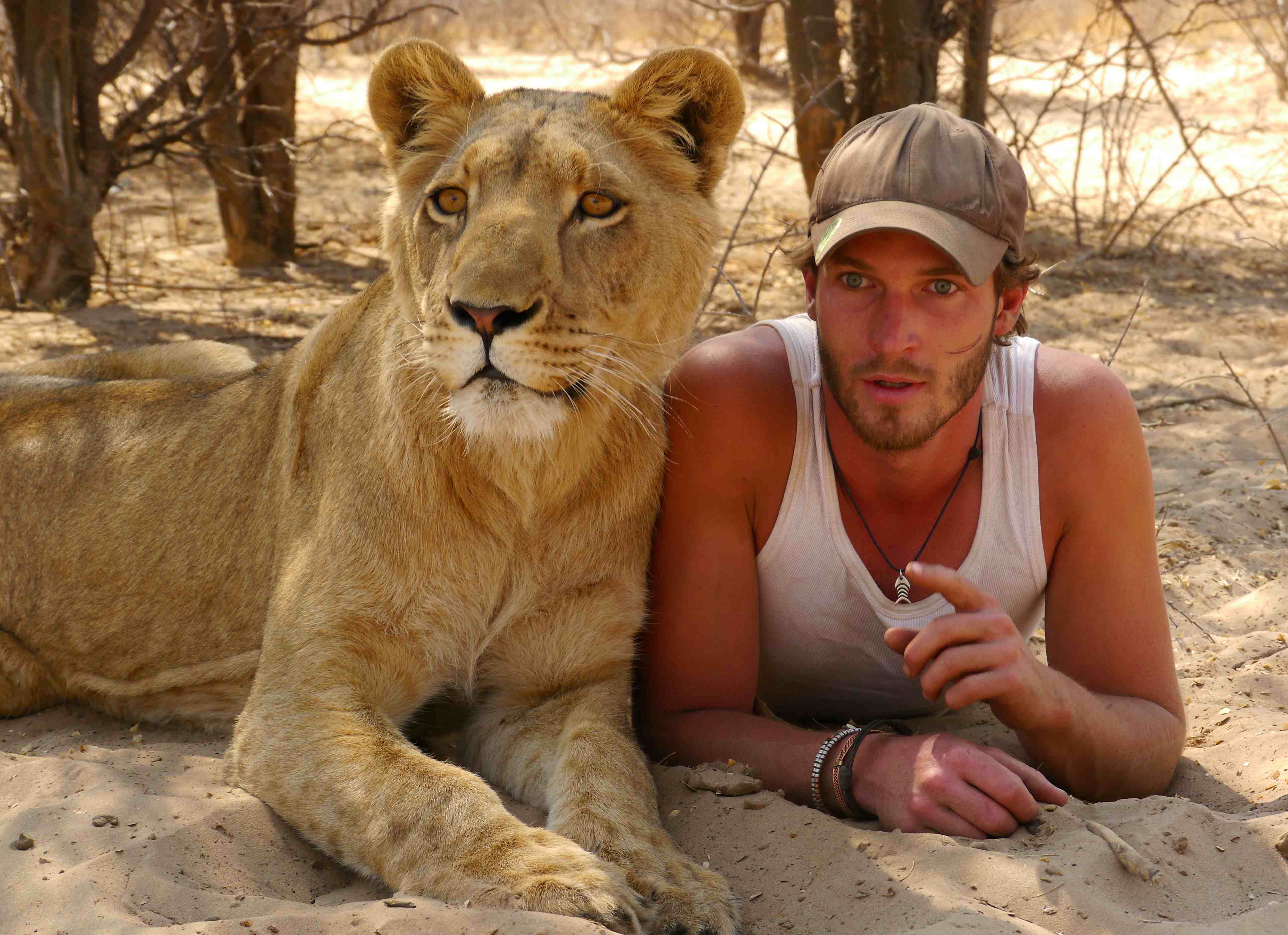 Why make a series about a man and a hand-reared lioness?

Tauana Films has been producing wildlife and conservation films in Africa for almost 40 years. As producers we have spent many years following and filming the behaviour of lions in the wild.

Simply put, we did it because Sirga’s story speaks to the heart, and because her story illustrates and embodies all the challenges faced by lions in the Kalahari today.

Sirga should never have been born. Her parents were wild Kalahari lions that dared to cross the fences separating the Central Kalahari Game Reserve from the cattle farms. Under normal circumstances they would have been shot or poisoned by farmers and their story would have died with them.  Instead, they were captured as rogues by Willie De Graaff, a cattle farmer.

Sirga, a direct victim of the conflict between farmers and predators, was born in captivity with two other siblings. Because they were in an enclosure Sirga’s mother could not move away from the pride after the birth and Sirga’s siblings were killed by the lions in the enclosure. Val Gruener who manages the care of the captive rogue lions on Grasslands saw that the one remaining cub was on the point of death, rescued her and raised her by hand.

When we heard that Val Gruener had rescued a lion cub from a lion enclosure at Grasslands we were sceptical of his motives. We feared that he wanted to start a petting zoo where lion cubs are bred and bottle-fed by tourists. We contacted him and warned him that if that was his intention we would report him to the Botswana government and have him stopped.

Val invited us to come and see what he was doing and judge for ourselves. Still we stayed away, because we had no interest in hand-reared lions, and because at that time one volunteer per week was allowed to accompany Val on his walks with Sirga. We could see no good coming of it and we told him so.

Then, at sixteen months Sirga brought down a hartebeest on a walk, and accepted Val at the kill without attacking him. That sparked our interest, because lions are notoriously aggressive around food.

We decided to pay a visit to Val and Modisa his small volunteer camp at Grasslands. What we found put our concerns to rest. Val Gruener might not be a scientist, but he has taken responsibility for and is committed to doing the best he can for the captive lions under his care. He has also committed himself to creating the best and freest life possible for the lioness he felt compelled to rescue.

Val felt that Sirga’s behaviour on her first kill had given him an opportunity. As a hand-reared lioness in Botswana she could never be released back into the wild, but Grasslands’ ten thousand hectares teems with large herds of game from springbok, wildebeest and hartebeest to eland and zebra. With Willie De Graaff’s permission he could go out on the farm with Sirga to give her time and opportunity to hone her instincts as a hunter. If she could learn to hunt Val would commit himself to finding a way to create a suitably fenced reserve for her where she can hunt and live in relative freedom for the rest of her life.

The first thing that struck us was the obvious and unforced level of trust and friendship between the young man and the 16 month old lioness. In the three years we subsequently spent working on the series Sirga was never kept on a leash, tethered or miss-treated in any way. She was never forced to perform or to do tricks. There was no sign of ‘lion handling’ or enforcing a ‘handler’s will’ on an animal. For her own safety (because she would be shot if she crossed the fence into a neighbouring cattle farm) Sirga was housed in an enclosure, but Val took her out on three to six hour walks almost every day. No one was allowed to walk with them except our cameraman who has more than thirty years’ experience in observing and filming lions in the wild. Sirga was obviously still a captive, but she was alive, well looked after and her behaviour around Val indicated that she looked forward to and was genuinely happy with any time spent with him.

Does Sirga have any conservation value?

Hand-reared lions are normally considered to have no conservation value and the hand-rearing of any wild predator is discouraged at all times.

But we should not let ourselves to be blinded to individual stories.

Sirga is an exception, because her story is a direct and integral part of the human/predator conflict story playing out all over Africa. As a result her life matters just as much as the lives of any of the wild lions that are losing habitat, or are in danger of being hunted or poisoned in Africa.

When we first met Sirga, a remarkable young lioness, our immediate thoughts were that here was a unique opportunity. It was an opportunity for a lion researcher to gather first-hand data on the physiological and developmental challenges faced by a young hand-reared lioness. Here was also an opportunity to compare the development of a hand-reared lioness with the development of a young lioness growing up and learning to hunt as part of a lion pride in the wild. There were intriguing questions: Can a hand-reared lioness who has never been part of a hunting lion pride become a successful hunter? Can she survive in the wild? How would she react if she encountered wild animals? How would she react towards Val on a kill once there was blood?

No researcher came forward, so we went ahead and filmed the process.

For us as film makers it was a unique opportunity to record all the above on film and to tell Sirga’s story and the story of the challenges faced by lions in the Kalahari Desert today.

We believe the story will inspire and educate both local and international audiences. We believe that both George Adamson and Dr George Schaller would have been fascinated by the behaviour and new perspectives modern-day filming equipment allowed us to record.

For the record: There are no lion cubs to pet and bottle-feed at Grasslands, where Val Gruener cares for captive rogue lions. Sirga is the only hand-reared lion there. She is not part of the small Modisa volunteer programme, but the volunteers remain emotionally invested in Val and Sirga’s story.

Already the Modisa volunteer programme has made hundreds of thousands of young people in Africa and across the world aware of the problems faced by lions in the Kalahari.

Not only does Val and Sirga’s story give meaning to the lives the captives at Grasslands, but for the first time ever it also creates awareness of the thousands of wild Kalahari lions that have been killed, poisoned or captured over the past century.

We see no reason at why Val Gruener cannot fund his wildlife awareness project by inviting paying volunteers to Modisa.  Voluntourism has become a global phenomenon. Even scientists now encourage volunteers to join them in the field to gain hands-on experience before deciding if research is what they wish to do.

Hundreds of thousands of Modisa followers show that there is a great need in a younger technologically savvy, but emotionally starved generation to be inspired, to connect with nature and predators, and to make a meaningful contribution.

Places like Modisa offer affordable ways for them to spend more time in a natural environment in Africa where they have the chance to interact with like-minded people, learn more about the natural world, and gain hands-on experience about the challenges facing wildlife in Africa.

Val Gruener clearly connects with a new generation that knows everything about social networking and little about physical connectedness. Sirga’s story allows this new generation, both locally and internationally, to connect with and relate to an important conservation story and to care enough to become involved in protecting what is left of Africa’s great wildlife heritage.

Film makers, conservationists and researchers today agree that 90% of the lions in Africa were lost over the past forty years. Fewer than 20,000 wild lions now remain.

It happened on our watch.

Val Gruener and committed and dedicated young people like him can hardly do worse.